Posted on 1 October 2013 by mamathegeek

M is having a bit of a test of the limits at the moment. I won’t say ‘terrible twos’ because she’s never been that bad, but every now and again she just pushes slightly to see where the limits are and what she can get away with. It’s always a frustrating time, especially when you compare it to how she was behaving just a week before, but it’s a normal part of growing up.

Take teeth brushing. This is an area that has always swung from bad to good and back again. One day she is brushing her teeth herself happily, making a game of it and responding positively to our praise and thanks. The next day she refuses to do it herself but is happy to stand open-mouthed for one of us to do it. Then she fights it completely, running about and not listening and clamping her mouth shut. There are no tantrums; she makes it into a big game, giggling and laughing as Tom and I try to stay calm and relaxed about it. She knows teeth have to be brushed – not once have we let her go to bed without doing them (unless she has fallen asleep in the car and gone straight to be without waking) – so she knows all her games and larking about is just stalling. So we persist, and we try new carrots (new toothbrush, new toothpaste, holding her up to see in the mirror). The only stick we have ever used is counting to three, after which Mummy or Daddy has to do it (and we do). 99% of the time she’s opened her mouth compliantly before we get to three, but recently she’s been waiting to see what happens once the countdown is complete. To be honest, I don’t know myself. I hate discipline; I’d always rather M decide for herself that she WANTS to do something. No with material rewards, always, but with emotional ones. The knowledge that she will feel good when she has brushed her teeth herself, and that Mummy and Daddy are proud of her for it. On good weeks, that may work. Right now it isn’t.

Bedtime has also become a little more difficult. For the past six or so months M has been happy to be left to fall asleep. We read her stories, tuck her in, get her some water, say goodnight and leave her to snuggle down herself. The last few nights she’s cried out for us as soon as we try to leave. I remind myself of the building blocks of attachment parenting, about meeting a child’s needs (but not necessarily their wants). If this was E I’d say she was working on a developmental milestone; perhaps she’s learning about object permanence, or distances, or having a growth spurt, or figuring out how to crawl. Things aren’t quite so cut and dry for a nearly-three-year-old but the same principles apply. So I don’t ignore M’s cries and let her self-settle. I don’t leave her in her room calling my name over and over. I go in, and I stroke her back. I crouch down to her level and look in her eyes and stroke her hair. Yesterday I sang her songs; the same songs I used to sing her when she was a baby (James Taylor, Carol King, Carly Simon. I was secretly miffed I didn’t get to sing her Elton John’s Your Song…). After a while she calmed and I could leave her to fall asleep.

Tom has different tactics, but same principles. He takes his ipad in and sits next to her, perhaps stroking or shushing, but playing on a game. M doesn’t need his full attention; she’s just happy that he’s there.

On Monday, after playgroup, M didn’t help tidy up like she usually does. She just stood watching the TV (one of the reasons I don’t like TV at playgroups). Usually she loves picking up the toys, putting them in the right boxes, singing the Tidy Up song and making a playful competition out of it with me and the other toddlers. Then when everyone else had left she charged round the room at high speed refusing to get her coat and shoes on, and then refusing to get on my back to go in the carrier (it’s a long walk along a main road, so she has to go in the carrier). It took me about 15 minutes to get her on my back. It’s the sort of wound-up behaviour that is so indicative of boundry-testing. How long can I do this for before Mum does something? Again, I won’t shout. I won’t use time-out. I won’t physically force her to get on my back. I try to ride it out, but I question what I could be doing differently. I wonder whether I’m going to far in my aim to follow gentle parenting and I’m raising a hooligan.

Then I remember about nursery. M is moving from Toddler room to Pre-School room. From Bobtails to Tiggy Winkles. As of this week, she’s a full time Tiggy. Of course it’s going to disrupt her behaviour! A big part of her routine has changed! She’s moved away from some of her friends and into a new room which is full of children she hasn’t played with before. She now has to start some school-like learning. She eats, plays and naps in a different room. It’s a major change, and of course it’s going to upset her for a while. So I hold her hand (figuratively) and help her transition. I sing to her. I praise her achievements. I talk with her about her behaviour, about talking to Mummy if things are bothering her, about doing fun things with Mummy and E when we go for walks and when we get home. On the walk home we talk, we tickle each other, we pretend to nearly fall in the ditches and we collect two Autumn leaves (a red one and a yellow one), a feather and a conker.

I am no longer frustrated with my little girl, and questioning my parenting. I am once more totally in love with her.

Then five minutes from home she fell asleep on my back. I managed to transfer her, without waking, out of the Rose and Rebellion carrier and onto her bed. She slept for two hours! So maybe that was why she was acting out, after all. 🙂 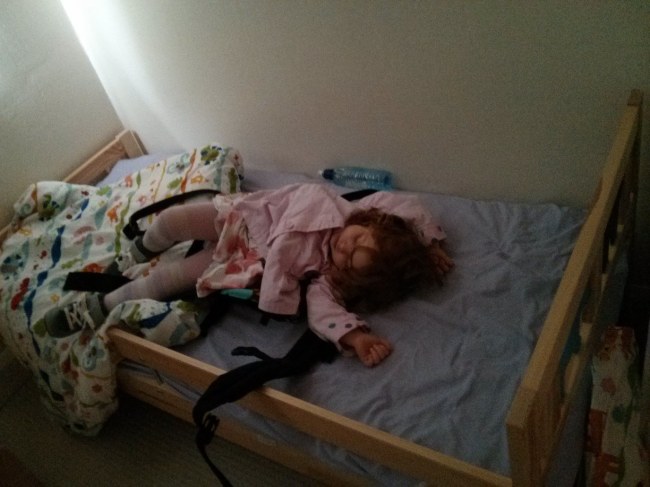 Fast asleep after morning playgroup, still tangled in the straps of the SSC

I am a mother to M and E, who are junior school aged children. I am a working mother, alternatively science geek and hippy. I work, sing, garden, photograph and try not to keep a tidy house. This blog is all about my experiences as a parent; contained within is everything from the very first days (nappies, poop, boobies, slings) to school days and beyond.
View all posts by mamathegeek →
This entry was posted in Uncategorized and tagged attachment parenting, behaviour, toddlers. Bookmark the permalink.