Posted on 5 January 2015 by mamathegeek

When we bought M a new car seat it was delivered in a pretty huge cardboard box. Like any good parent, we asked M what she wanted to do it – she said build a rocket! So we made it into a rocket. Sadly I do not have any photos, but M drew a door and windows on it and I cut them out using strong kitchen scissors (wonky and everything – just how she drew them!). Tom then made a pointy top for it and M and E both played in it for a while, before it got moved into the utility room because of space issues.

Then, recently, it got brought out again and declared to be a house. I cut new, square windows and a bigger door. We stuck a chimney on the top. Then WE GOT OUT THE PAINTS.

I was probably more excited about this than the girls were. Actually, E was over the moon armed with a brush and endless squirts of poster paint. M actually got a bit frustrated with it and said she’s rather play on the CBeebies website thanks. So E and I pained for a while. Later, when E was sleeping, I invited M to help me and she was much keener – I think she was put off by the sheer scale of the project and once the bulk of the cardboard had had one coat she was much more keen to add some details.

So now we have the Amazing Most Awesome Rainbow House of Toy Storage! E likes to go into it to poop (hello, potty training!) and actually widdled on the floor of it once during nappy-free time (oops).

The problem is, now it is painted it is a lovely thing and cannot be got rid of. Not like the train we made when E was tiny, which could be recycled fairly easily. No, this house is far too pretty! Until it gets damaged and we decide we need the space, of course…

Miles Cat quite likes it, too 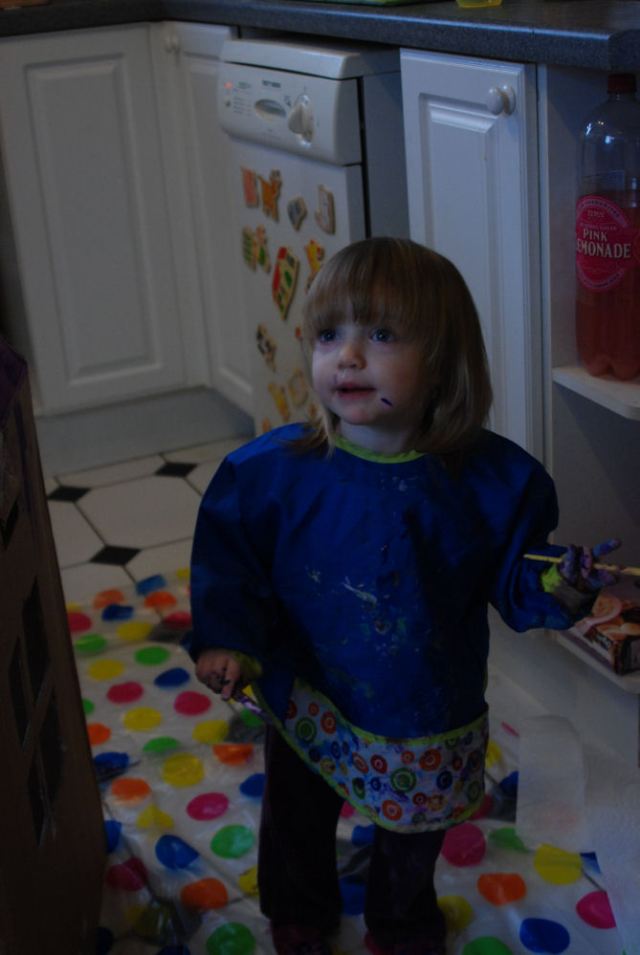 Yes, there was paint on her feet, face, hands, tummy, hair and she needed a bath in the sink afterwards!

The bottles need painting, too! 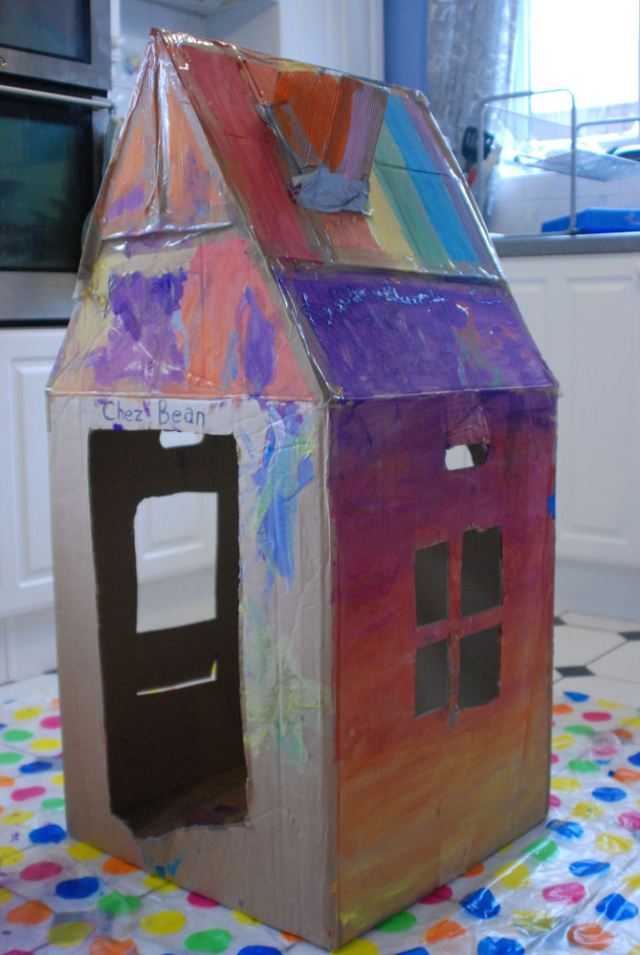 E painted the front, I did the stripes and sunset, M did the front of the roof

Details on the back

I am a mother to M and E, who are junior school aged children. I am a working mother, alternatively science geek and hippy. I work, sing, garden, photograph and try not to keep a tidy house. This blog is all about my experiences as a parent; contained within is everything from the very first days (nappies, poop, boobies, slings) to school days and beyond.
View all posts by mamathegeek →
This entry was posted in Uncategorized. Bookmark the permalink.